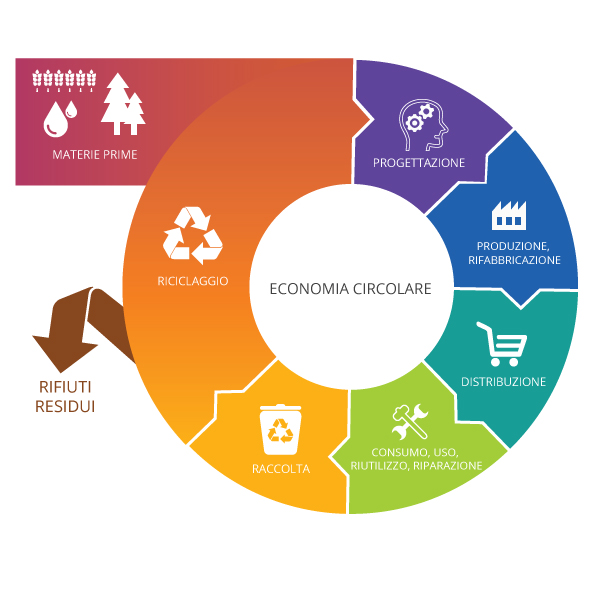 From Wikipedia, the free encyclopedia
A circular economy is a regenerative system in which resource input and waste, emission, and energy leakage are minimised by slowing, closing, and narrowing material and energy loops. This can be achieved through long-lasting design, maintenance, repair, reuse, remanufacturing, refurbishing, and recycling. This is contrast to a linear economy which is a ‘take, make, dispose’ model of production.

The term encompasses more than the production and consumption of goods and services, including a shift from fossil fuels to the use of renewable energy, and the role of diversity as a characteristic of resilient and productive systems. It includes discussion of the role of money and finance as part of the wider debate, and some of its pioneers have called for a revamp of economic performance measurement tools.

“The concept of a circular economy (CE) has been first raised by two British environmental economists David W. Pearce and R. Kerry Turner. In Economics of Natural Resources and the Environment, they pointed out that a traditional open-ended economy was developed with no built-in tendency to recycle, which was reflected by treating the environment as a waste reservoir”. The circular economy is grounded in the study of feedback-rich (non-linear) systems, particularly living systems. A major outcome of this is the notion of optimising systems rather than components, or the notion of ‘design for fit’. As a generic notion it draws from a number of more specific approaches including cradle to cradle, biomimicry, industrial ecology, and the ‘blue economy’.

Emergence of the idea

In their 1976 Hannah Reekman research report to the European Commission, “The Potential for Substituting Manpower for Energy”, Walter Stahel and Genevieve Reday sketched the vision of an economy in loops (or circular economy) and its impact on job creation, economic competitiveness, resource savings, and waste prevention. The report was published in 1982 as the book Jobs for Tomorrow: The Potential for Substituting Manpower for Energy.

Considered as one of the first pragmatic and credible sustainability think tanks, the main goals of Stahel’s institute are product-life extension, long-life goods, reconditioning activities, and waste prevention. It also insists on the importance of selling services rather than products, an idea referred to as the “functional service economy” and sometimes put under the wider notion of “performance economy” which also advocates “more localisation of economic activity”.

In broader terms, the circular approach is a framework that takes insights from living systems. It considers that our systems should work like organisms, processing nutrients that can be fed back into the cycle—whether biological or technical—hence the “closed loop” or “regenerative” terms usually associated with it.

The generic Circular Economy label can be applied to, and claimed by, several different schools of thought, that all gravitate around the same basic principles which they have refined in different ways. The idea itself, which is centred on taking insights from living systems, is hardly a new one and hence cannot be traced back to one precise date or author, yet its practical applications to modern economic systems and industrial processes have gained momentum since the late 1970s, giving birth to four prominent movements, detailed below. The idea of circular material flows as a model for the economy was presented in 1966 by Kenneth E. Boulding in his paper, The Economics of the Coming Spaceship Earth. Promoting a circular economy was identified as national policy in China’s 11th five-year plan starting in 2006. The Ellen MacArthur Foundation, an independent charity established in 2010, has more recently outlined the economic opportunity of a circular economy. As part of its educational mission, the Foundation has worked to bring together complementary schools of thought and create a coherent framework, thus giving the concept a wide exposure and appeal.

Most frequently described as a framework for thinking, its supporters claim it is a coherent model that has value as part of a response to the end of the era of cheap oil and materials and can contribute to the transition to a low carbon economy. In line with this, a circular economy can contribute to meet the COP 21 Paris Agreement. The emissions reduction commitments made by 195 countries at the COP 21 Paris Agreement, are not sufficient to limit global warming to 1.5 °C. To reach the 1.5 °C ambition it is estimated that additional emissions reductions of 15 billion tonnes CO2 per year need to be achieved by 2030. Circle Economy and Ecofys estimated that circular economy strategies may deliver emissions reductions that could basically bridge the gap by half.

With a surge in popularity, many circular principles are available, varying widely depending on the problems being addressed, the audience, or the lens through which the author views the world. There are at least the following key elements to be identified within a circular economy.

Ensure renewable, reusable, non-toxic resources are utilised as materials and energy in an efficient way. Ultimately the system should aim to run on ‘current sunshine’ and generate energy through renewable sources. An example of this principle is The Biosphere Rules framework for closed-loop production which identifies Power Autonomy as one of nature’s principles for sustainable manufacturing. It requires that energy efficiency be first maximized so that renewable energy becomes economical. It also requires that materials need to be non-toxic to be able to recirculate without causing harm to the living environment.

Use waste as a resource

The second element aims to utilise waste streams as a source of secondary resources and recover waste for reuse and recycling and is grounded on the idea that waste does not exist. It is necessary here to design out waste, meaning that both the biological and technical components (nutrients) of a product are designed intentionally in such a way that waste streams are minimalized.

Design for the future

Account for the systems perspective during the design process, to use the right materials, to design for appropriate lifetime and to design for extended future use. Meaning that a product is designed to fit within a materials cycle, can easily be dissembled and can easily be used with a different purpose. Hereby one could consider strategies like emotionally durable design. It should be stressed that there is not something like one ideal blueprint for future design. Modularity, versatility and adaptiveness are to be prioritised in an uncertain and fast evolving world, meaning that diverse products, materials, and systems, with many connections and scales are more resilient in the face of external shocks, than monotone systems built simply for efficiency.

Preserve and extend what’s already made

While resources are in-use, maintain, repair and upgrade them to maximise their lifetime and give them a second life through take back strategies when applicable. This could mean that a product is accompanied with a pre-thought maintenance programme to maximise its lifetime, including a buyback program and supporting logistics system. Second hand sales or refurbish programs also falls within this element.

Within a circular economy, one should work together throughout the supply chain, internally within organisations and with the public sector to increase transparency and create joint value. For the business sector this calls for collaboration within the supply chain and cross-sectoral, recognising the interdependence between the different market players. Governments can support this by creating the right incentives, for example via common standards within a regulatory framework and provide business support.

Track and optimise resource use and strengthen connections between supply chain actors through digital, online platforms and technologies that provide insights. It also encompasses virtualized value creation and delivering, for example via 3D printers, and communicating with customers virtually.

Prices or other feedback mechanisms should reflect real costs

Any cookies that may not be particularly necessary for the website to function and is used specifically to collect user personal data via analytics, ads, other embedded contents are termed as non-necessary cookies. It is mandatory to procure user consent prior to running these cookies on your website.